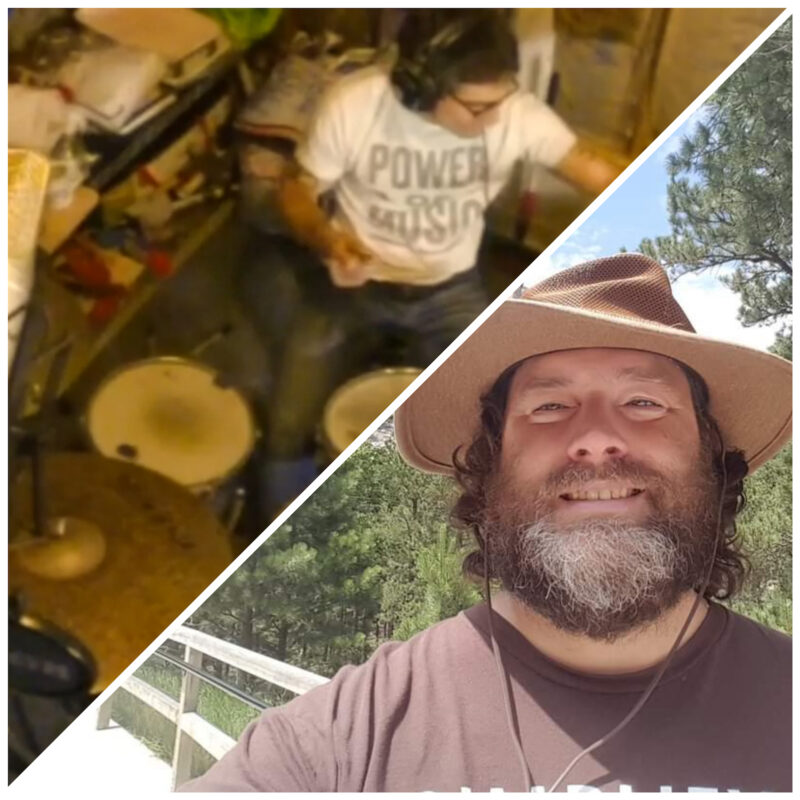 Gareth: Throughout the lockdown of spring 2020, I yearned to connect – with other people, with the world around me, and with my drums. But working from home sapped my energy and drive. The strangeness of not hugging or shaking hands and of avoiding people on the street, was intense. Distanced human interactions took on a feeling of surreality, mistrust, and danger. We saw only the top halves of one another’s faces; it was quite frightening to not see anyone smile!Seated, two-dimensional monotony sucked the soul out of endless video conferenced meetings. I should have gone outside more, but it was freezing in the Poconos the whole of March and rained nearly every day throughout April. Plus I just couldn’t motivate myself to activity.

Then an opportunity crossed my path to drag me out of a slump and combine a handful of elements life was missing. The Earth Day Art Model Telematic Festival called for performances of music about our planet and the natural world. My mind skipped to the soulful poems in Dan’s book on eco-literate music pedagogy, and I suggested I play drums to him reading them aloud. Dan agreed. Engaging with his voice, I felt intimacy with another human that had been sorely lacking. The prosody of his evocative words about earth, birds, and meditation inspired me to creative depths whence I summoned drums and metals to sing alongside Dan. As he says in one of the poems, this was an exercise for me in timeful “listen-waiting” and responding.

Dan: The global pandemic grew relentlessly, with no end in sight. My classes at Penn State Altoona were all dislocated to Zoom in March 2020, as I juggled teaching students who themselves were trying to figure out how to return home to Pennsylvania, to California, to China, to UAE, while U.S. politics, including the politics of the pandemic, were grotesque. Also in March, President Trump declared the pandemic a national emergency, less than a month after claiming coronavirus would “disappear … like a miracle.” Being a scholar focussed on ecological literacy, I knew intuitively that Covid has an ecological root, beginning with ecosystem degradation, disturbances, the pet trade, and unsustainable livestock production. Many people stayed inside, or found solace picking up harmless activities like jogging to cope with the pandemic. However, Amaud Arbery, a jogger, was killed by White Georgia residents in February, and Breonna Taylor was killed by plainclothes police who broke into her house in Kentucky. These hit me particularly hard, as a husband and father to an African American wife and son. I was drowning in stress when Penn State went virtual, trying to figure out how to teach courses in classical music and theory online, after I had structured the classes rooted in student creativity and cooperative action; while aiding my son, whose classes went virtual. My family’s Facebook poem-a-week, and time spent outside with family were a salve. An imperative counterweight to ecological destruction, White supremacy, and the pandemic.

Alternatively, Covid lowered our global carbon emissions beginning in March 2020. When Gareth reached out to me with the intent to turn my poems, published in Eco-Literate Music Pedagogy, into music, I was ready to add something beautiful to the world. I recorded the poems and emailed them to Gareth, who added percussion accompaniment. This was similar to a process I have used with my introductory music theory class, where students compose music and lyrics and share them in class. It was a joy to have the opportunity to create in this way myself.

We invite fellow musickers to join us in this talk as we reflect on our collaboration at the conference.